The RichRod era has begun in Arizona and it started off with a great offensive performance; however, something was missing: scores. The Wildcats amassed 624 total yards, but managed to only score four times in their 24-17 OT victory against the Toledo Rockets. The offense was superb and fast paced, oftentimes running a play once the referee set the ball, but there were too many mistakes. Toledo isn't a bad team and should be a favorite to win the Mid-American Conference, but they should've been pummeled. The Cats offense had so many opportunities to score TDs, but two were called back by penalties and the Cats fumbled three times in the redzone. Arizona should have won in regulation, but John Bonano shanked a 26 yard field goal at the end of regulation that would have given the Cats the victory. Instead the game went to OT, where the Cats recieved the ball first and scored on a beautiful Matt Scott scramble-and-throw to Terrence Miller for the 10 yard go-ahead score. The Cats defense would hold on and give Arizona its first victory of the RichRod era. The offense looks to be one of the most productive offenses in the Pac 12 as well as Arizona history with Matt Scott throwing, running, and handing the ball off to Ka'deem Carey, who looks to be an explosive RB that the Arizona program has lacked for quite a while.
Posted by fan-addict at 11:27 PM 1 comments

NCAAF Preseason: A look at the 2012 Heisman Candidates and Hopefuls

The Favorites:
#1. Matt Barkley, USC: Barkley is entering his Senior year as quarterback at USC and he has all of the tools to win another Heisman for the Trojans. With two dangerous wide recievers, a talented backfield and a stout offensive line, Barkley looks like a favorite to win the trophy and he can only blame himslef if he doesn't. Even if he doesn't win the trophy, he'll still be the top QB of the 2013 NFL Draft 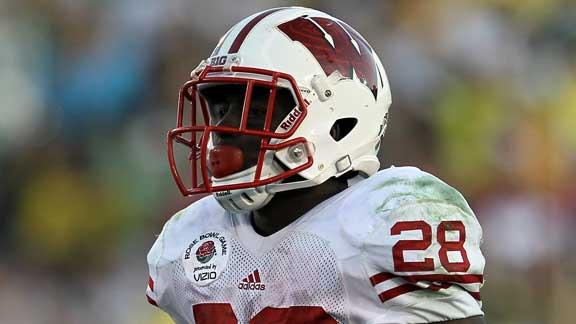 #2. Montee Ball, Wisconsin: Now that the nation knows who Montee ball is, Heisman Voters will be on the look out. This guy is special and will be a top tier NFL running back, but the college system of ranking the best player always leans towards the QB. Without a star QB on Wisconsin, Ball should get many touches and that means more TDs. I don't think he'll get 39 TDs again, but he'll put up Heisman-worthy yards. #3. Geno Smith, West Virginia: No one will benefit more from West Virginia's move to the Big 12 than Geno Smith. Putting up monster numbers in the Big East is cool, but it's hard to attract Heisman talk unless you are a title contender. The Mountaineers move to the Big 12 does make them a title contender, which will put Smith in the spotlight. If he can perform against top-tier football teams every week like he did against Clemson in the Orange Bowl, Smith will be a dangerous Heisman contender. #4. De'Anthony Thomas, Oregon: The one thing I can't stand about the Heisman is that it tries to give NFL prospects a ton of publicity before the NFL draft. The voters always seem to forget that this award is for the best college football player, not the best NFL prospect. De'Anthony Thomas is a player who has potential to break all college football rushing records, but it is very possible that the Heisman voters will not crown him the title of "best college football player" just because he won't succeed in the NFL. #5. Le'Veon Bell, Michigan State: Michigan State looks to be a very good and physical team in the Big 10. This means that they will shut down opposing defenses and hand the ball off to Le'veon Bell 30-40 times a game. He is huge for an all-down running back at 6'2", 244 lbs and figures to be one of the top running backs selected in either the 2013 or 2014 NFL draft. If Michigan State can muster some respect around the nation as a football power and maybe even recieve a Rose Bowl berth, Bell will be the greatest benefactor.