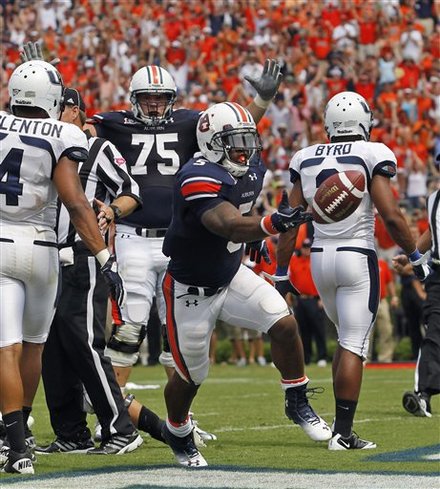 Michael Dyer ran for a one yard touchdown with 45 seconds to go as Auburn avoided becoming the first NCAA champion to lose their opening game in the BCS era. Auburn came back from a 38-28 deficit in the 4th quarter with 4 minutes left to score twice and beat Utah State 42-38. Barrett Trotter threw a 15 yard touchdown to Philip Lutzenkirchen with 2:12 left to cut the deficit to 3. With only one timeout remaining, Gene Chizik opted to go for the onside kick which Auburn executed to perfection. Michael Dyer would then punch in the one yard touchdown as Auburn avoided what would've been an embarrassing upset. 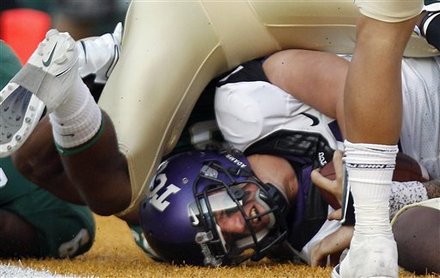 Robert Griffin III went 21-27 with 359 yards and 5 TDs as the Baylor Bears shocked the 14th ranked TCU Horned Frogs in a 50-48 upset. The game proved to be an exciting shootout as Griffin III, Kendall Wright, and TCU's Casey Pachall threw for a total of 10 TDs in the game. RG3 led Baylor to a 47-23 lead at the start of the 4th quarter, but Pachall would start a TCU rally as they scored 25 unanswered points to take a brief 48-47 lead with 4 minutes 31 seconds left in the game. Griffin III would lead Baylor on the ensuing drive to set up the go-ahead 37 yard field goal. This is Baylor's first victory over a ranked team since beating 16th ranked Texas A&M seven years ago so you can bet they'll be partying in Waco. As for TCU, the Horned Frogs will not go to a BCS bowl this year after two consecutive berths.